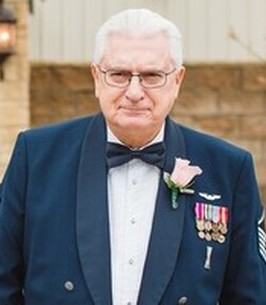 Roy J. “Skip” Brewer, 78, of Algonac died suddenly on Monday, July 12, 2021. He was born on September 1, 1942 to the late Roy J. and Evelyn Brewer in St. Clair, Michigan. He married Nancy Brown-Arnold-Brewer on February 6, 1998 in Marine City, Michigan and they enjoyed 23 years of marriage. He attended Marine City High School and joined the United States Air Force in June of 1961. Roy served two tours in Vietnam and one in Panama. Roy had a love for airplanes and enjoyed 20 ½ years in various fields of aircraft maintenance. He retired from the Air Force in December of 1981 with the rank of Master Sergeant. He was a deputy sheriff in Wichita Falls, Texas for many years. He was then hired by the Air Force as a civilian to teach aircraft maintenance. He left Texas in 1997 and returned to Marine City. In his twilight years, Roy and Nancy lived in Port St. Lucie, Florida for 18 years. While in Florida, Roy was very active in many veteran organizations, including being a life time member of Veterans of Foreign Wars, Vietnam Veterans of America and Disabled American Veterans. Roy was chair of United Veterans for St. Lucie County. He was also chair of Gold Star Family Memorial Monument under the Woody William Foundation in Port St. Lucie.
Roy is survived by his beloved wife, Nancy; his children, Scott Brewer of Curlew, WA, Christine (David) Cook of Greenwood, NE, Mark (Tonya) of Allen, TX, and Lisa (Cory) Mulder of Amarillo, TX; six grandchildren; six great-grandchildren; two sisters, Gloria Mapletoft of Marine City and Darlene Cowper of Port Huron; a special brother-in-law, Ronald (Marylee) Brown; a nephew, Kent Brown of Decatur, GA; a niece, Linda Gardner of The Colony, TX; a special niece, Kathleen McGlynn; a very special friend, Loretta Vandric of Port St. Lucie; and his cat, Shadow. In addition to his parents, he was preceded in death by a son, Timothy Brewer in 2005 and a sister, Ruth McGlynn.
Visitation will be held on Sunday, July 18, 2021 from 3:00pm to 8:00pm in the Bower-Rose Funeral Home, Marine City. A funeral service will be held on Monday, July 19, 2021 at 11:00am with an hour of visitation prior to service in the funeral home. Burial will be in Woodlawn Cemetery, Marine City.  Memorials may be made to Vietnam Veterans of America, Michael F. Bradley Post 566, PO Box 7385, Port St. Lucie, FL 34985. To send condolences, visit: www.bowerrosefuneralhome.com .