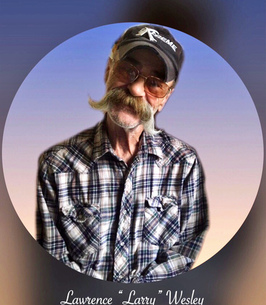 Lawrence “Larry” Wesley, 73, of Memphis entered eternal life on November 5, 2020.
He was born in Detroit, Michigan to the late Earle and Margaret Wesley. Larry married the love of his life, Patricia “Pat” Carney on November 13 and they enjoyed nearly 51 years of marriage. He served his country honorably in the United States Army during the Vietnam War.  After his military service, and later retirement from General Motors, Larry carried forward his amazing work ethic and a lifetime of experience to work with community youth, learning the trade of being a Butcher, and was always on the quest to expand his knowledge.   He led by example by taking an active role in encouraging his children’s education and activities by coaching hockey, softball, and leading fundraising efforts for a local figure skating club.  Larry’s passion for education and learning were evident in his participation in the local school districts where his children had attended in both Ferndale and Troy.
He was a member of multiple groups including, the Disabled American Veterans, the American Legion and Veterans of Foreign Wars. In his free time, he enjoyed riding his motorcycle, discussing history, and kicking butt in Trivial Pursuit.   As an avid music lover, he found enjoyment in writing poetry and songwriting.
Most of all he was devoted to his family. Larry is survived by his wife, Pat; his two daughters, Jennifer (Thomas “Togie”) Gwyn of North Carolina and Kathleen (Noah) Hodierne of North Carolina; a daughter-in-law, Kristen Wesley of Richmond; six grandchildren, Megan, Emma, Jonathan, Isabella “Izzy”, Alexander, and Matthew; his brother, Raymond Wesley; and his sister, Judith Ann Grodzki. In addition to his parents, he was preceded in death by his son, Andrew John Wesley in 2013; and his sister, Maxine F. Tobey in 2014.
In the spirit of a true soldier, Larry fought an incredible battle against Pancreatic Cancer and was nearly an 8-year survivor.  He is quoted to say at his 5-year mark against the cancer, “The overall pancreatic cancer survival rate of one year is 20% and only 7% make it 5 years. This month is my 5-year anniversary and am still clear. I'll never complain about not winning the lottery again”.
“Carpe Diem” – words to remember as Larry seized each day, lived life to its fullest and stated he had no regrets and wouldn’t change a thing.  Larry will always be remembered as the life of the party; grab a Bushmills, raise your glass, and toast to Larry – Husband, Father, Grandpa, Brother, Cousin, Uncle and Friend.
Cremation has taken place. A celebration of Larry’s life will be held in the summer of 2021. Arrangements were made by Kammeraad-Merchant Funeral Home, Memphis. To send condolences, visit:  www.kammeraad-merchant.com .
In lieu of flowers, please donate to any Veteran support services.
Disabled American Veterans  https://www.dav.org/ways-to-give/