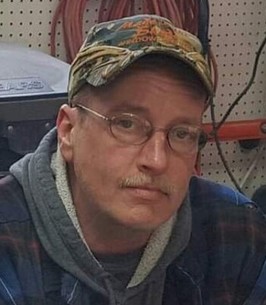 Kenneth Fredrick Bibeau, 54, of Marine City entered eternal life on Tuesday, December 22, 2020.  He was born on April 3, 1966 to Daniel and Roberta Williams (ne Bibeau) in Marine City MI. Ken was proud to be Mariner, attending the all-state football games to support his hometown. He graduated in 1986. Ken went on to become an expert cabinet maker whose work can be seen in places like COBO Hall, and Comerica Park. Kenneth was the oldest child of 6, and took the role very seriously.  Here was the go-to brother for bike fixing, car fixing, being the hero who rescued you on the side of the road, or from mean boyfriends as us girls got older.  As an uncle, he stepped up where dads were missing or lacking in our kid's lives so the kids never felt unloved.  Kids loved their uncle Ken.  If you needed something and Ken had it, it was yours, no matter the inconvenience to himself. He never complained, nor asked for a thing. His time on earth was truly spent enjoying life and living and caring for his family and friends, and he had many. In the past 5 years we knew Ken was living on borrowed time.  5 years ago, he had a major heart attack and he flat lined, was pronounced dead and was gone for 118 minutes.  His son Kenny came into the room to say goodbye and he woke up.  Just like that.  No brain damage, nothing, but living on borrowed time nonetheless from the damage to his heart and kidneys.  So, Ken lived his last years his way and died on his terms.  He kayaked, and road tripped and enjoyed bonfires, and camped, and went to fireworks and parades and refused to sit and just die.  He once pointed to his body and told me he was going to "ride this mf until the wheels fall off, I either get busy living or I get busy dying, so I choose to live but I'm going to do it my way".  His last physical act of labor was creating a monster jungle gym setting set for his grandchildren with all of the bells and whistles.  It's huge.  When he was asked why it was so big his reply was simply that "I want to be able to see them play from heaven”, then the tears fell. He knew his time on earth was limited and he was planning.  Ken was a deep thinker, always a step ahead.  He leaves behind his cherished girlfriend, Carol Harmon, two children: Ashley Dupine (Michael), and Kenneth II (Erica), 10 grandchildren: Frederick, Daniel, Annabelle, Mary Jane, Christian, Cody, Caden, Carsen, Keegan, and Lillian, 5 brothers and sisters: Bobby Bibeau (Candie), Richard Bibeau (Jill), Danielle Workman (Billy), Jessica Williams (Russ), Jonnelle Williams (Michael), and many nieces and nephews. He was preceded in death by: his wife Irene Bibeau, grandparents Timothy and Marne Bibeau, grandson Gabriel Bibeau, many good friends, and his 2 beloved dogs; Buddy and Chaser. Cremation arrangements were made by Bower-Rose Funeral Home, Marine City. To send condolences, visit: www.bowerrosefuneralhome.com .