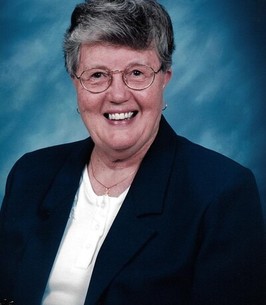 Barbara P. Christie, 92, of Marine City entered eternal life on Tuesday, June 22, 2021. She was born on September 22, 1928 in Detroit, Michigan.
When Barbara was a young woman, she attended flying school and acquired a pilot’s license in 1944. While attending she met one of the teachers, James Edwin Christie. Her and James would go on to court each other and then become united in marriage on January 1, 1949. They enjoyed 29 years together until his passing on November 15, 1978.
Barbara’s faith was important to her and she was dedicated to her church. She participated in missionary work for the Lutheran Bible Translators, traveling to Africa several times to aid the churches in their communities. She also held a long-standing career working for the Anchor Bay School District for 21 years until her retirement. When she wasn’t working, she was devoted to her family.
Barbara is survived by her son, William Christie; her daughter, Carol Rivard; five grandchildren, Rachel, Joseph, Johnathan, James and Justyn; seven great-grandchildren; a brother, Dr. Timothy (Jerelene) Scott of Virginia; and a sister, Patricia (Robert) Hallock. In addition to her parents and her husband, she was preceded in death by two children, John S. Christie and Gayle Marie Christie; and a son-in-law, Joseph Rivard.
Visitation will be held on Monday, June 28, 2021 from 4:00pm to 8:00pm in the Bower-Rose Funeral Home, Marine City. A funeral service will be held on Tuesday, June 29, 2021 at 11:00am with a visitation from 10:00am until the time of service in Good Shepherd Lutheran Church 31100 23 Mile Road, New Baltimore, MI 48047. Burial will be in Oakwood Cemetery, New Baltimore. To send condolences, visit: www.bowerrosefuneralhome.com .